Get it now with

These lower powered riflescopes are great for close to mid range shooting. They are widely used in Europe and offer excellent clarity and a wide field of view, which greatly assist the shooter to engage dangerous and quick moving targets.

The circle dot reticle can be illuminated red or green and the brightness adjusted to suit the ambient conditions.

SEE NICK HARVEY`S REVIEW IN THE 2016 NOVEMBER ISSUE OF THE SPORTING SHOOTER MAGAZINE .

TODAY the optics market is so competitive that quality is generally similar within a given price range. At the lower end of the market where Chinese­ made optics are concentrated, there’s a wide variety of riflescopes in different grades that are designed to be affordable. The lowest-priced ones are generally pretty basic instruments with nothing much to recommend them, but by the same token there are a few brands that are optically excellent and entirely practical – like Arctic Fox.

Brian Blake of Arctic Fox Optics sent me samples of two new additions to the upgraded Arctic Fox line, a 1-5x24IR and a 6-24x50IR. The former is ideally suited for large-bore dangerous-game rifles and scout-style bolt-action carbines;the latter is a simonpure varmint-target scope.

Both optics are based on a heavy 30mm matte-black, one-piece, main tube. Taking the 1-5×24 first, it has a third turret with integrated battery compartment with a rheostat for illuminating the reticle for use on overcast days in wooded country and in the poor light conditions encountered at dawn and dusk. You have a choice of a green or red reticle which can be varied in five different intensities to suit ambient light conditions. For driven game in low light for fast target acquisition , I’ve become enthusiastic about lighted reticles.

The simple second-focal­ plane reticle has a large circle in the centre with bars right, left and bottom. Measured against the one-inch squares on my sighting-in target at 100yd, the circle subtends about 6 inches at 100 yards. Obviously the intended use for this uncomplicated aiming device is catching a fast aim at close quarters on large and belligerent game intent on trampling or horning the hunter to death. While it’s a darn good reticle for tracking running game like pigs and deer at short to medium ranges, nobody is going to choose it for precise shooting at targets, but it was never intended for that purpose. However, there is a barely discernible dot in the centre of the circle that does allow a fine aim to be taken.

The widely copied Duplex-style reticle introduced by Leupold is preferable for almost all general hunting situations.

The short, compact scope has no objective bell, only the straight tube common to this type of scope. A large diameter 45mm eyepiece with binocular type focusing has the power ring located in front of it.

Focus is obtained by turning the rear ring of the eyepiece which remains stationary while the ocular lens cams in and out. One turn of the ring provides a wide range of focus and since the ocular lens isn’t locked in place, the scope can be instantly refocused to suit different shooters.

Field is increased with the use of a larger ocular lens, which is the system most European and Japanese makers use. On bolt action rifles this makes it necessary to mount the scope higher to allow the bolt handle to clear the larger eyepiece. But I’ve found medium height rings usually do the job all right without having to go to high rings.

The adjustment turrets are uncapped and have 1,12 inch, clicks. They are higher and protrude farther than most hunters like, but a lock ring at the base of each turret turns anti-clockwise to Iock the settings to that they cant possibly get shifted by accident.

The 1-5×24 is quite hefty, adding 515 grams to the weight of the rifle outfit, but that’s not a worry on the type of rifle it will be attached to. It would be just as much at home on the Ruger Scout as one. Of the big CZ magnums where the weight and 230mm length of the scope would be a big advantage. It helps the weight of the rifle to settle Iow between the shooter’s hands, not above them.

One thing to watch For: Weight in the scope adds inertia, which resists the pull of the rings rearward at recoil. Powerful big bore rifles can unseat heavy scopes during recoil which makes it imperative that it be mounted solidly against any movement.

A big advantage of this kind of scope is that the user is better served by the wide field of view – ranging from 36 metres at l-x to 7 metres at 5x. Combine this with true colour rendition, a flat field, sharp focus and non-critical eye relief and you’re all set when you are trying to aim quickly at a deer in overdrive or a buffalo heading in your direction intent on committing mayhem upon your person.

Long eye relief 90mm allows great latitude of eye placement behind the ocular Iens for short. quick shooting in brush. Low magnification and a broad field of view allows faster aiming, enabling you to get on target sooner. The reality is, however, a few extra feet of field doesn’t matter much in Iow-power scopes. Any scope under 3x can (and should be) used with both eyes open, the reticle and rim of the eyepiece floating in a field of view as wide as the great outdoors. Your right eye looks through the scope while your left eye looks around it, a system that works equally well on buffaloes at 25 metres or a deer at 200. Wide-angle riflescopes don’t seem worth the compromises in eye relief or magnification.

For testing I attached the Arctic Fox 1-5×24 to a Winchester Model 70 in .325 WSM to shoot the square at 50 yards. I figured the shorter distance would work better with the low magnification and 1/2″ clicks. The adjustments proved precise enough and repeatable within normal parameters. This rugged dangerous-game scope retails for a reasonable $400. 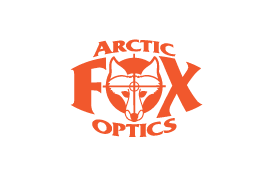